Book Review: Chip Davis’s “The Wolf and the Warlander” Trilogy 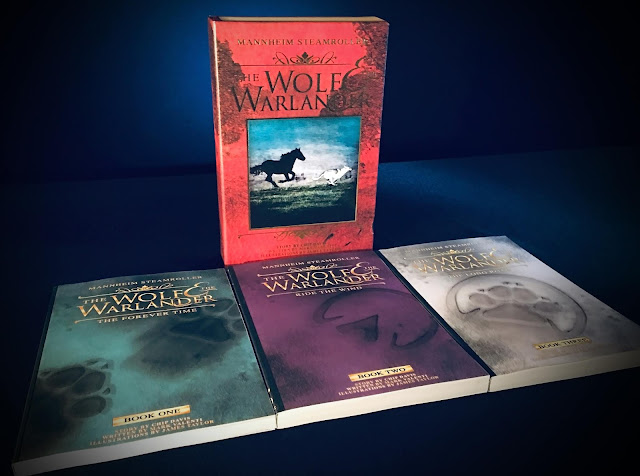 When I was a kid, I loved to read books during summer break. I spent countless hours flipping through pages of well-worn books, escaping into stories of intrigue and mystery.

The reading you did during elementary school had a special impact on you — more than the books you consume as an adult. I think that’s partly due to younger minds being able to willfully suspend disbelief.

I was recently given the opportunity to read a trilogy of books that are the brainchild of Chip Davis — founder and leader of the Omaha-based music group Mannheim Steamroller.

Before we go any further, I can’t imagine Christmastime without the pulsating rhythms of Mannheim Steamroller’s 1984 album Christmas. Davis’s electronic stylings on that album epitomize the holiday season for me.

As a small business owner myself, I appreciate Davis’s entrepreneurial efforts over the years — products that go beyond the music.

For example, one of my early clients was the Greater Omaha Barbeque Society. I did the newsletter for the organization, and Davis’s grilling product “Bry” (a liquid seasoning in a spray bottle) was one of the barbeque-related confections advertised during those years (I found Bry to be particularly good on grilled chicken).

Chip Davis’s “The Wolf and the Warlander” trilogy is reminiscent of books I read during the latter stages of elementary school and early stages of middle school.

The three books are part of a boxed set produced by American Gramaphone (Davis’s company). They are written by Mark Valenti and feature illustrations from James Taylor.

They are set in a time period that appears to be the late 19th or early 20th century.

Each book focuses on the adventures of a wolf named Seti and a Warlander horse named Ghost — oddball friends in the natural world who forge a life-long friendship.

Both animals are named for Davis’s real-life pets. If I recall correctly, there was a segment focusing on Davis’s animal friends during the PBS special “Mannheim Steamroller 30/40 Live.”

Seti is adopted by Ghost’s family at an early age. The young wolf pup becomes part of the family — something out of sorts in the animal world.

“The Forever Time” — Book One

The first book in the series — “The Forever Time” — sets the stage for both of these characters. The story recalls Disney’s 1981 movie “The Fox and the Hound.”

“The Forever Time” pours the foundation for the next two books in the trilogy.

One of the more entertaining aspects of the “The Forever Time” is the segment focusing on “The Running” — a race that “lasted an entire day” where many horses “never made it to the end.”

The race itself serves as a metaphor for life. It also enhances the narrative fleshing out the relationship between Ghost and his father Pegasus — providing some “Jedi-like” moments as Ghost trains for the race. It sets up a classic proving scenario for our young protagonist since his father was legend in “The Running.”

Pegasus tells his young son, “The first part of the race is all about watching the other horses. See if you can spot the ones who seem strong, but aren’t using their power yet. Those are the horses who will still be running at the finish line.”

During the training, Ghost expresses doubt about his readiness to run in the race. His father intones, “You’re a Warlander. And you’re my son.”

Both Ghost and Seti long for adventure in their lives. While the two kindred spirits find their paths moving in separate directions, fate has a way of bringing them together.

Early on in “The Forever Time,” Ghost learns about his Warlander ancestry, and how his forebearers served at Neuschwanstein Castle in Bavaria (a real-life structure that served as inspiration for Walt Disney’s famous castle).

Here is a photo I took of Disney's Bavarian-inspired castle on a recent trip to Disney World: 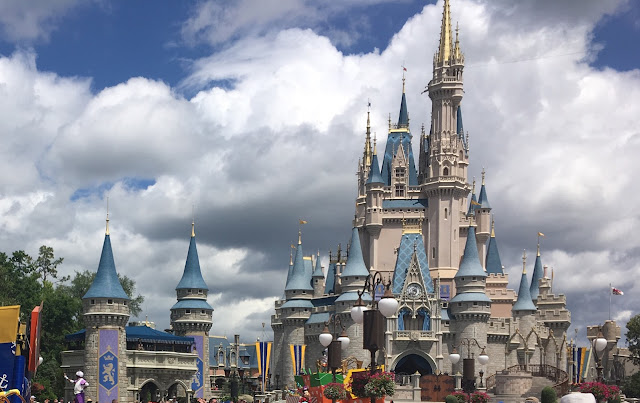 That legend of the Warlanders — and the castle in Bavaria — pops up throughout the trilogy. It is the middle-grade-horse-story equivalent of Roland’s quest to see “The Dark Tower” in Stephen King’s long-tread fantasy series.

It is interesting to note that the author had a stint as Creative Manager for Disney Interactive during his career. In addition, he worked on programs for ABC Family, Nickelodeon, the Hallmark Channel, and Steven Spielberg’s Amblin Entertainment.

You can certainly see those influences in “The Forever Time” — a tale that is told in small “vignettes.”

While the first book does a yeoman's job setting up the story, the emotional heft in “The Wolf and the Warlander” trilogy comes in the next two novels.

“Ride the Wind” is the second book in the “Warlander” trilogy.

Here we see Ghost and Seti as they mature into adulthood. Seti has a family and is quickly becoming the “alpha” in his pack, while Ghost experiences pangs of love for the first time. 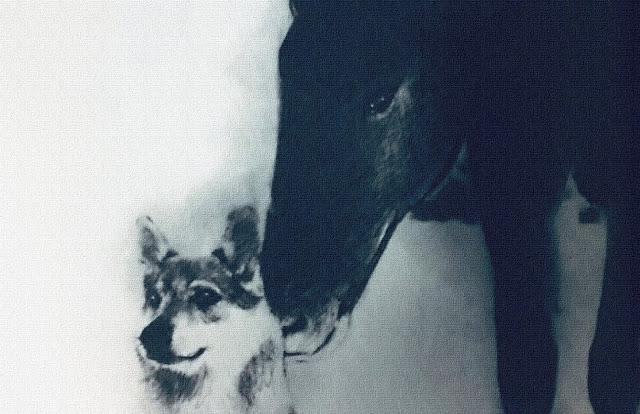 There is a twist that sends Ghost on a harrowing journey — a dangerous sequence where the future of our protagonist is threatened for the first time in the trilogy.

It is mentioned early in “Ride the Wind” that Ghost “thought about the promise he made to himself long ago — to see the world; to have many adventures; and to become as great a horse as his father.”

There is a fun new character introduced during the second book: a dog who finds his way into Seti’s pack. The canine thinks of himself as a wolf, and helps the weary wolves find water.

I should point out that these stories feature sage advice on life. As such, if you have kids, it might be fun to read the stories together.

For example, when Ghost is considering a relationship with his girl-horse crush Echo, his father offers this advice:

“Your mother and I took a long time to know each other. When there were hard times — and there are always hard times with everyone — instead of fighting against each other, we stood by each other’s side and figured out the answer together.”

“Ride the Wind” features a more fully-realized narrative than “The Forever Time.”

Some years have passed since the events in “Ride the Wind.”

Our protagonists are getting older, and facing the very real possibility that their best years are behind them. This creates an existential crisis for our protagonists.

The meat of “The Long Road” focuses on Ghost and Seti setting forth on an adventure together — something both had spent their lives longing to do.

But the adventure is more than a mere journey. It is a quest to see the castle Ghost’s father had told him stories about during his youth.

All doesn’t go according to plan, and there are moments when things look bleak. The stalwart Seti opines, “Ghost, even if your father’s castle was set on fire; if it was made of mud; if there turns out to be no castle at all, I would never leave you on your own. I promised you I’d come with you on this adventure. I’d never break my word to you.”

These dire sequences in “The Long Road” prove to be among the best the series has to offer, and provide a nice philosophical core underpinning our characters’ honor and integrity.

The author writes that the duo “set out to find adventure and ended up finding themselves.”

When I read that quote, it reminded me of the trailer for the 1990 Kevin Costner movie “Dances With Wolves.”

During the trailer, there are interstitials that read, “In 1864 a man went looking for America... and found himself.”

(I don’t know why I just tossed a reference to “Dances With Wolves” in here. Maybe it is because the wolf Seti in “The Wolf and the Warlander” trilogy reminded me of the wolf “Two Socks” in Costner’s movie.) 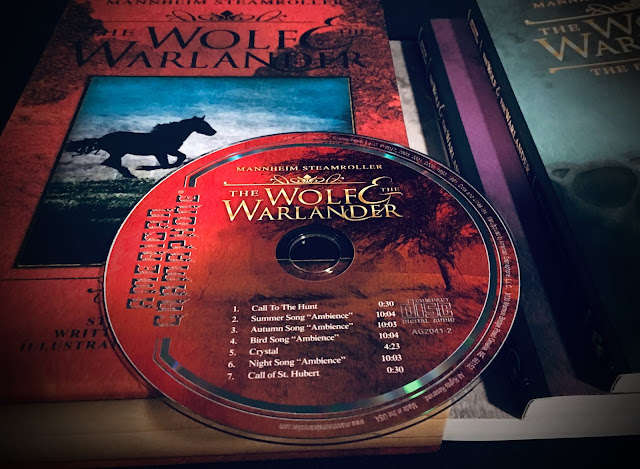 In addition to the books, there is a CD with “atmospheric effects” (roughly 45 minutes long) included in the box set to listen to while you read the stories. While the CD provided a nice backdrop, I wished Davis (talented musician that he is) had created a “mini-soundtrack” to go along with the book trilogy.

“The Wolf and the Warlander” is an engaging fiction saga from one of this generation’s beloved musicians.

I’d particularly recommend these books for those in the latter stages of elementary school and middle school who enjoy stories about animals and adventure. I think they’d find a lot to like in this set.